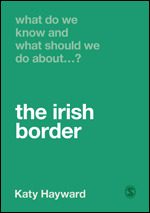 Share
Series:
What Do We Know and What Should We Do About:
Other Titles in:
British Government and Politics | EU Politics | European History
June 2021 | 112 pages | SAGE Publications Ltd
Download flyer
The Irish border is a manifestation of the relationship between Britain and Ireland. When that relationship has been tense, we have seen the worst effects at the Irish border in the form of violence, controls and barriers. When the relationship has been good, the Irish border has become - to all intents and purposes - open, invisible and criss-crossed with connections. Throughout its short existence, the symbolism of the border has remained just as important as its practical impact.

With the UK’s exit from the European Union, the challenge of managing the Irish border as a source and a symbol of British-Irish difference became an international concern. The solution found in the UK-EU Withdrawal Agreement gives the Irish border a globally unique status.

A century after partition, and as we enter the post-Brexit era, this book considers what we should know and do about this highly complex and ever-contested boundary line.

If you've ever wondered to yourself: 'Why is that border there in Ireland anyway?', then this is the book for you. If you have ever thought: 'Why was the Irish border such a pain the butt of Brexit?', well, this is the book that'll tell you. Katy Hayward's book explained me to myself. It's like she's written my autobiography. Brilliant.

This short book explaining the tricky subject of the Irish border and what it means for post-Brexit UK is immensely important. Katy Hayward has been the leading voice on the complex situation in and around Northern Ireland since the referendum. There is no one better to answer the question  ‘what we should do about’ the borders around Northern Ireland.

Since the Irish border collided with Brexit, Katy Hayward has singularly explored the issues. This book takes a hard look at the shifting historical, political, economic and emotional forces that have shaped the frontier, and the identities and attitudes that cannot escape it. It is detailed, nuanced, even lyrical, and very timely.

I have no doubt that this little book by Professor Katy Hayward should become the “go to” text for those who are looking for a succinct and clear eyed view of the powerful political, economic and cultural influence which the Irish Border carries right down to today.

Most Rev’d John McDowell - Archbishop of Armagh and Primate of All Ireland, Church of Ireland

There is no one better to explain the impact of Brexit on the island of Ireland, and on the border that cuts across it. You need to understand the history and the politics, the culture and the law – and Katy Hayward has mastered them all.

Katy Hayward’s book achieves that rare combination of ambition and conciseness. It concentrates into less than 100 pages a vast range of history, theoretical observations on the meanings and social relations associated with borders, and contemporary policy insight. [...] This important book brings clarity and precision to this discussion. It deserves to be widely read.

Migrants and Natives - 'Them' and 'Us'

The Politics of Migration and Immigration in Europe