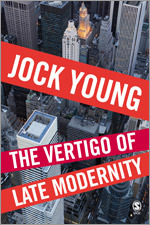 Share
Other Titles in:
Criminology (General) | Cultural Studies (General) | Sociology (General)
February 2007 | 240 pages | SAGE Publications Ltd
Download flyer
'Immersing himself in the whirling uncertainty of late modernity, confronting its odd deformities of essentialism and exclusion, Jock Young has produced a comprehensive account of contemporary trouble, anxiety, and transgression. If this is criminology-and it's surely criminology of the best sort-it is a criminology able to account not just for crime and inequality, but for the cultural and the economic, for the existential and the ontological as well. Perhaps most importantly, it is a criminology designed to discover in these intersecting social dynamics real possibilities for critique, hope, and human transformation. Jock Young's The Vertigo of Late Modernity is a work of sweeping-dare I say, dizzying-intellect and imagination.'

'This is precisely what readers would expect from the author of two instant classics: a book that is bound to become the third. As is his habit, Jock Young launches a frontal attack on the 'commonsense' of social studies and its tacit assumptions - as common as they are misleading. Futility of the 'inclusion vs exclusion', 'contented vs insecure', or indeed 'normal vs deviant' oppositions in the globalised and mediatized world is exposed and the subtle yet thorough interpenetration of cultures and porosity of boundaries demonstrated beyond reasonable doubt. The newly coined analytical categories, like chaos of rewards and chaos of identity, existential vertigo, bulimic society or conservative vs liberal modes of othering are bound to become an indispensable part of social scientific vernacular - and let's hope that they will, for the sanity and relevance of the social sciences' sake'

'Jock Young is one of the great figures in the history of criminology. In this book he prises open paradoxes of identity in late modernity. We experience an emphasis on individualism in an era when shallow soil forms a foundation for self-development. Young deftly analyses shifts in conditions of work and consumption and the insecurities they engender. This is a perceptive reformulation of job, family and community in late modernity'

The Vertigo of Late Modernity is a seminal new work by Jock Young, author of the bestselling and highly influential book, The Exclusive Society.

In his new work Young describes the sources of late modern vertigo as twofold: insecurities of status and of economic position. He explores the notion of an underclass and its detachment from the class structure. The book engages with the ways in which modern society attempts to explain deviant behaviour - whether it be crime, terrorism or riots - in terms of motivations and desires separate and distinct from those of the 'normal'. Young critiques the process of othering whether of a liberal or conservative variety, and develops a theory of 'vertigo' to characterise a late modern world filled with inequality and division. He points toward a transformative politics which tackle problems of economic injustice and build and cherish a society of genuine diversity.

This major new work engages with some of the most important issues facing society today. The Vertigo of Late Modernity is essential reading for academics and advanced students in the areas of criminology, sociology, cultural studies, anthropology and the social sciences more broadly.

Crossing the Borderline
The Disembededness of Everyday Life
The Genesis of Othering
The Attractions of Hiatus
The Vertigo of Late Modernity
Turbo-Charged Capitalism
Blurring the Binary Vision
Bulimia: Not Exclusion But Inclusion/Exclusion
Crossing the Borderline: Against the Dual City Thesis
The Functional Underclass
The Boundaries of Bulimia
The Precariousness of Inclusion
The Crime and the Narrowing of Differences
The Focus Upon the Underclass
Globalisation and the Generation of Domestic and Global Discontent
The Sociology of Vindictiveness and the Criminology of Transgression
Fear of Falling
The Change in the Focus of Reward
Towards a Criminology of Transgression
Humiliation and Rebellion
The Satisfactions of Transgression
The Humiliation of Exclusion
Edgework, Ontological Security and Utopia
From Turf War to Real War
Hip Hop Across the Borders
Chaos and the Coordinates of Order
Chaos and Identity in the Twenty First Century
The Undermining of the Meritocracy
Changes in the Perceived Class Structure
The Shift to Identity Politics
Antecedents of the Cultural Shift
The War Against the Poor
The Meta-Humiliation of Poverty
The Decline of Work and The Invisible Servant
The Declining Centrality of Work?
Getting the Poor to Work: The US Experiment
Redemption Through Labour
Including the Excluded
Welfare: From Relief to Irresponsibility
Early Morning in Harlem
The Invisible Worker
The Invisible Servant
Entering the Zone of Humiliation
Service as a Feudal Relationship
The Invisible Poor in a Classless Society
Guilt and Middle Class Solipsism
Social Inclusion and Redemption through Labour
New Labour: New Inclusionism
The Welfare State: Not the Solution but the Problem
The Will to Win
Many's a Slip Twixt Cup and Lip: New Labour's Obsessional Neurosis
The Moral Panic Over Teenage Pregnancy
Rationality and the Middle Classes
From Structure to Agency: Beyond the Weak Thesis
Social and Political Exclusion
Crossing the Border: To These Wet and Windy Shores
The Social Construction of the Immigrant
To These Wet and Windy Shores
Two Modes of Entry
Over Twenty Years Ago: The Riots of 1981
Crime and the Demonisation of the Other
The Roots of Othering
The Final Phase: The Irony of Assimilation
The Roots of the Disturbances
The Riots in Bradford, Burnley and Oldham
Postscript: The Riots in France 2005
Terrorism and Anti-Terrorism Terrorism: The Banality of Evil
Proxy Wars and the Defeat of the Soviet Union
Occidentalism
The House of Bush and the House of Saudi
The Two Contradictions: Inside and Outside the First World
Symmetry and Differences
The Beatification of Evil
The Logic of the West
The Photographs from Abu Grahib
Love Was All They Had to Set Against Them
The London Bombing and the Banality of Evil
The Dialectics of Othering and the Problem of Evil
The Generation of Anger and the Frustration of Normality
The Othering of the Otherer
The Summoning Up of Violence
Violence and the Metaphor of War
Elsewhere: On the D Train to Manhattan
Urban Somnambulism: Elsewhere in a Brooklyn Deli
The Exclusive Community
The Organic Community
Othering in the Ardoyne: The Holy Cross School
The Fallacy of Privileging Community
Enter Virtual Reality: Elsewhere in the East End
Stars, Celebrities: Guiding Narratives for a Shifting World
The Cronus Effect and Broken Narratives
The Deterritorialisation of Community and the Rise of the Virtual
Elsewhere in an Elevator: John Jay College, October 2004
The Rise of Multi-Media and the Uninvited Guest
From Generalised Other to Generalised Elsewhere
From Community to Public Sphere
The Community in Late Modern Times
Conclusion: Roads to Elsewhere
Affirmative and Transformative Inclusion
The Politics of Redistribution
Towards a New Politics of Inclusion
The Politics of Deconstruction
Othering and Community
The Banishment of Unreason
Rationality, the New Media and the Public Sphere
The Porous Community
Hyperpluralism and the Elusive Other
Towards a Politics of Diversity

Perspectives on Deviance and Social Control

The SAGE Handbook of Neoliberalism

The ANNALS of the American Academy of Political and Social Science