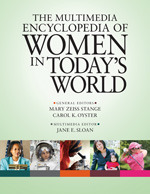 Share
Other Titles in:
Sociology of Gender | Women in Management | Women's Studies (General)
July 2012 | SAGE Publications, Inc
Download flyer
Nearly 18 million Americans voted for presidential candidate Hillary Clinton in the 2008 Democratic Primary elections. Sixteen of the current U.S. senators are women. Some glass ceilings are being broken, but at the same time, there were only 12 female CEOs of Fortune 500 companies in 2007. After three waves of feminism of the course of more than a century, where do women stand in today's world? Students, researchers, librarians, and academics will be hard-pressed to find a comprehensive reference to modern women among the 220 titles that contain the words "encyclopedia" and "women." Current titles, ranging from Encyclopedia of Women and Baseball to Encyclopedia of Women Artists to Encyclopedia of Women in History, cover only segments of women's history and culture. Also, most existing titles look at women in the past; The Multimedia Encyclopedia of Women in Today's World looks at women today and delves into contexts of being female in the 21st century. Thus, the scope of the encyclopedia focuses on women's status starting approximately in the year 2000 and looks forward. From A-to-Z, this work covers the spectrum of defining women in the contemporary world. In keeping with the focus on the contemporary context, this is not a static work; rather, after initial publication (in both print and electronic versions), this electronic version will see significant annual updates to add new content and fresh, new multimedia.