SAGE Stock Take: Please be aware SAGE Distribution (including Customer Services) will be closed from 25th-30th November. Whilst you can still place an order during this time, you order will be held for despatch until after this period. Service will resume on the 1st December. 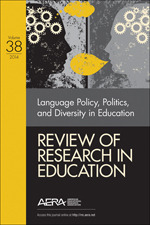 Review of Research in Education (Volume 38) explores the important role of educational language policies in promoting education as a human right. Even in English-dominant countries, such as the United States, it is important to understand the role of educational language policies (ELPs) in promoting educational access through the dominant language, and its impact on educational equity, achievement, and students’ sense of identity. This volume addresses whether language minorities have a right not only to linguistic accommodations but also to the promotion of their languages as a means for developing a positive identification with their languages and cultures.  With language diversity in flux due to large-scale trends with widespread implications, this timely volume offers a solid background to inform and influence policies and programs for millions of students worldwide.
Introduction
Terrence G. Wiley, David R. Garcia, Arnold Danzig, and Monica L. Stigler
Language Diversity, Policy, and Politics in Education
United States Context
Terrence G. Wiley
Diversity, Super-Diversity, and Monolingual Language Ideology in the United States: Tolerance or Intolerance?
Ofelia García
U.S. Spanish and Education: Global and Local Intersections
Reynaldo F. Macías
Spanish as the Second National Language of the United States: Fact, Future, Fiction, or Hope?
Jeanne M. Powers
From Segregation to School Finance: The Legal Context for Language Rights in the United States
Teresa L. McCarty and Sheilah E. Nicholas
Reclaiming Indigenous Languages: A Reconsideration of the Roles and Responsibilities of Schools
Jin Sook Lee and Wayne E. Wright
The Rediscovery of Heritage and Community Language Education in the United States
Jeff Bale
Heritage Language Education and the “National Interest”
International Context
James W. Tollefson and Amy B. M. Tsui
Language Diversity and Language Policy in Educational Access and Equity
Stephen May
Justifying Educational Language Rights
Colin H. Williams
The Lightening Veil: Language Revitalization in Wales
Elana Shohamy
The Weight of English in Global Perspective: The Role of English in Israel
Vaidehi Ramanathan
Overcoming Colonial Policies of Divide and Rule: Postcolonialism’s Harnessing of the Vernaculars
Conclusion
Joseph Lo Bianco
A Cerebration of Language Diversity, Language Policy, and Politics in Education
About the Editors
About the Contributors