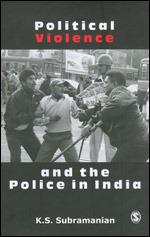 'K.S. Subramanian provides a comprehensive, well-balanced analysis of the history, organisation and contemporary functioning of the central police forces (including the Intelligence Bureau). This is an up-to-date, insider perspective from a person with broad administrative experience, who is also sensitive to human rights issues' - Paul R Brass, Professor (Emeritus), University of Washington

'Political Violence and the Police in India is a welcome addition to our understanding of the problems faced by the police in India' -- Julio Ribeiro, Former Director-General of Police, Punjab

· identifies patterns and trends in political violence in India;

· examines how the government's political machinery has responded;

· explains why State response has been inadequate;

· and recommends changes in structures and attitudes.

The author sketches the growing crisis of governance by assessing the Central and state governments' police organisations, especially key central agencies such as the Intelligence Bureau, the Central Paramilitary Forces and the Union Ministry of Home Affairs. In case studies of regions and communities affected by political violence, he takes the reader behind the scenes - whether it is on police partisanship in the communal pogrom in Gujarat, the official approach to the Naxalite problem, the violence against dalits and adivasis, or the violation of human rights in northeast India.

With police reform being a major public concern, police research is gaining importance as a field of study. This book will appeal to students of criminal justice, political science, sociology, public policy and public administration, as well as policy makers, police and administrative officers, and human rights activists.

Introduction
Preface
Political Violence and State Response in India
The Indian Police System in Crisis
Intelligence Bureau: An Instrument of Partisan Politics
Central Paramilitary Forces: A Parallel Police Force?
Naxalite Violence: What Can the Union Home Ministry Do?
Violence Against Dalits and Adivasis: Whither Social Justice?
State-Sponsored Violence Against the Muslims in Gujarat, 2002: A Case Study in Police Partisanship
Political Violence in the Northeast
The Human Rights of Ordinary People
Conclusion
Appendices
References
Index

K S Subramanian’s book is a well-written and scholarly work dealing perceptively with the problems of growing political violence in the country and the failure of the Indian police to combat it….Subramanian’s scholarly book will be a valuable addition to the literature on police issues in India. His analysis is lucid and cogent and illumined by his wide-ranging study and comprehension of police problems and dilemmas in other countries of the world.

[This book] is well-documented and well-written….a good addition to the literature on the study of the Indian state, the police and the Intelligence Bureau.

The author…talks of the increasing political violence in India that is challenging the government’s ability to resolve conflicts democratically….The book concludes with suggestions for police reforms.

The book is significant because it helps challenge the narrow confines of the public debate on police reform, which invariably descends into politician bashing and, therefore, see reforms as freeing the police from their clutches….it is a splendid reference book for anyone interested in understanding the role of police in the Indian state and society.

A retired IPS officer, who stood out as a conscientious cop throughout his career, calls India…a seemingly democratic State that is highly militarised, using exceptional brutality against its own people while still picking up leaves from old colonial hand book….It is not often that one finds a senior police officer (albeit retired) writing about the army, police and paramilitary forces while, at the same time, calling a spade a spade. For this reason, K S Subramanian’s book makes a remarkable reading. In 250 pages, he covers a wide spectrum of issues on political violence.

In case studies of regions and communities affected by political violence, Subramanian takes the reader behind the scenes—whether it is on police partisanship in the communal pogrom in Gujarat, the official approach to the Naxalite problem, the violence against dalits and adivasis, or the violation of human rights in northeast India.

In this clear and highly informative book, K S Subramanian, a former police and intelligence officer and an accomplished scholar, shows how, from the very moment of Independence, the new political bodies swiftly ensured that law and justice were replaced by law and order; order, namely established power, wealth and authority, was to be maintained by any means and at any cost.

With the clinical detachment of a highly skilled surgeon, Mr Subramanian has laid bare the innards of the Indian state with all its frightening ugliness. Sinister attributes of the state which he has so adroitly and masterfully revealed would fascinate, nay, hypnotise any discerning reader….Chilling, compelling and controversial it should be compulsory reading for all the entrants to the Indian Administrative Service and the Indian Police Service. Even if one disagrees one must know what one was disagreeing with. It should adore the book-shelf of all serious students of Indian governance.

The separatist movements in the peripheral regions that question the very legitimacy of the Indian state’s dominance were spawned by a variety of post-independence developments. It is such a landscape of violence that K S Subramanian portrays in the book under review together with, and this is what adds immensely to the value of the work, the response of the Indian state thereto. In doing so, he has delved deep into history, sociology, economics, mass psychology and electoral politics, not to mention administrative dystrophy and political skulduggery, severely affecting the Indian state’s capacity to address and contain the rising tide of social and political unrest and violence, so as to pinpoint the structural and organizational infirmities of the Indian state and its various mechanisms in managing violence and conflict in a turbulent society….An important feature of the book is the plentiful data on many aspects of crime and public order that the author has meticulously collected to flesh out arguments….’The Indian police system as a whole … is afflicted by organizational, managerial, and policy crisis. Politicization, criminalization, corruption, brutality and human rights violations are eating into its vitals. Public order maintenance and political intelligence take up most of the time of the Indian police with little left for crime prevention, crime detection and service provision. The police leadership has remained a prisoner of the political party in power at all levels and has failed to contribute to organizational renewal and revitalization, research and training and the nurturing of professional skills’ (p. 57).

K S Subramanian provides a comprehensive, well-balanced analysis of the history, organisation and contemporary functioning of the central police forces (including the Intelligence Bureau). This is an up-to-date, insider perspective from a person with broad administrative experience, who is also sensitive to human rights issues.