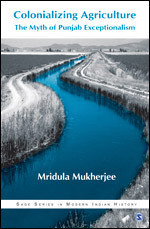 Share
Volume: 9
Series:
SAGE Series in Modern Indian History
Other Titles in:
Development Studies (General)
November 2005 | 240 pages | SAGE Publications Pvt. Ltd
Download flyer
This book is the first comprehensive study of the impact of colonialism on the agriculture of this very important region which, apart from the Pakistani and Indian provinces of Punjab, included the present day Indian provinces of Haryana and Himachal Pradesh.

Making extensive use of data culled from government archives and private papers in India and Britain, as well as from village surveys, farm accounts and family budgets, the author argues that Punjab was by no means an idyllic land of prosperous peasant proprietors. She maintains that it was also the land of big feudal landlords, rack-rented tenants, and struggling small-holders, who were forced to enlist in the army or migrate to enable their families to pay government taxes and to repay debts. Comparing Punjab with its supposed polar-opposite, the eastern region of Bengal and Bihar, Mridula Mukherjee demonstrates that Punjab too had begun to exhibit features typical of colonial under-development, such as stagnation of productive forces, intensification of semi-feudal relations, forced commercialisation and lack of capital investment in agriculture. The green revolution therefore was not the result of a continuity but actually because of a break with the colonial past.

Mukherjee’s Colonizing Agriculture represents a significant contribution to an  understanding of the transformation of the agrarian economy of Punjab under colonial rule… it seeks to arrive at some refreshing and original conclusions.

The present volume is a valuable one not only in terms of its being a comprehensive study of the colonial impact on an agriculturally very important region, but also as an example of a model of historical scholarship  with its feet firm on the ground (of hard data) and withstanding temptations towards stratospheric musings.

Mukherjee has examined the evidence available in land records and other contemporary reports of the Punjab government. The bibliography is delightful as are the footnotes…. This book should be read by all reformer economists, even if it is not written by an economist. It provides insights that only historical records, not endless regressions, can provide.