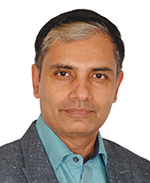 Subhomoy Bhattacharjee, with twenty-two years of experience in journalism, is a Consulting Editor for Business Standard. His areas of interest include public policy, especially regulatory issues, finance and urban development.

He is the author of Special Economic Zones (SEZ) in India: Myths and Realities. He has authored a study on the Land Acquisition Act, a project on comparative land prices in India’s selected districts and its relation with industrialisation, commissioned by GIZ, India, and TARI. He has previously contributed to other books, including Media at Work in China and India: Discovering and Dissecting (SAGE, 2015).

Subhomoy studied economics at Shri Ram College of Commerce and at Delhi School of Economics, both affiliated to the University of Delhi. He began his career as a civil servant, joining the Indian Information Service through the civil services exam. He has subsequently worked with The Economic Times and was until recently the deputy editor at The Indian Express while writing for The Financial Express too.

Presently, he is also a consultant with Research and Information Systems for Developing Countries (RIS). He frequently appears on television and radio on economic news programmes and has lectured in several universities in India and abroad, on public policy.
India’s Coal Story