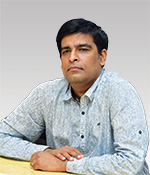 Sidharth Balakrishna holds an MBA from the Indian Institute of Management (IIM) Calcutta and an Economics degree from the Shri Ram College of Commerce (SRCC), Delhi University. He has over 15 years of experience in the media and entertainment, artificial intelligence, energy, infrastructure and education sectors.

He has been an executive (whole time), Board Director and Chief Strategy and Innovation Officer at the Essel (Zee) Group, and is leading several strategic initiatives in digital transformation and artificial intelligence. He has led strategy and headed many large projects in the fields of oil & gas, renewable energy, education and water. Sidharth Balakrishna has also been a strategy consultant with Accenture and KPMG. Some of the projects that he has led have been awarded nationally and internationally.

He is a mentor to start-ups with MIT, Boston, USA, as well as MassChallenge Boston and Tel Aviv, Israel.

Mr Balakrishna has also written five books. He is a visiting faculty at a number of management institutes in India and delivers full credit courses at IIM Indore on artificial intelligence and strategy at FMS, Delhi University.

He has presented at a number of international fora, in more than 10 countries, including London, Amsterdam, Muscat, Dubai, Myanmar, Mozambique, Kuwait, New Delhi, Goa and Mumbai. He has been a columnist with the Economic Times, the London School of Economics, and has written several articles. Sidharth has been interviewed by the media a number of times and was featured in 2018 on the cover of the Corporate Citizen magazine. A chapter was dedicated to him in the book Heroes amongst Us recently and the Delhi University awarded him for his work in the media sector in 2019.

Cut to the Chase