Author
SAGE online ordering services and account tools will be unavailable due to system maintenance Saturday, July 11, 6:30pm - 10pm GMT . If you need assistance, please contact SAGE at info@sagepub.co.uk . Thank you for your patience and we apologise for the inconvenience. 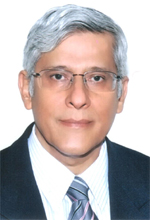 R. H. Khwaja has served as Secretary, Ministry of Mines and Ministry of Tourism, Government of India. He belongs to the 1976 batch of the Indian Administrative Service (IAS). He completed his graduation in 1974 from St Stephen’s College, Delhi. His postgraduation in history is from Aligarh Muslim University.

During his tenure in IAS, he has served with distinction in many key assignments in the Union Government and State Government. Some of his important assignments include (a) Collector and District Magistrate, Khammam, (b) Commissioner, Municipal Corporation of  Hyderabad, (c) Joint Secretary to Government of India in the Ministry of Environment and Forest and (d) Chairman and Managing Director (CMD), Singareni Collieries Company Limited (SCCL).

In recognition of the outstanding leadership during his tenure as CMD in SCCL, Khwaja received three national-level awards including ‘Manager of the Year Award 2005’ by Hyderabad Management Association.

The Government of Andhra Pradesh bestowed the prestigious ‘Telugu Uttama Seva Pathakam’ on him for outstanding work done during river Godavari floods in 1986 while serving as collector and district magistrate, Khammam.

He has visited many countries as an expert under the aegis of Convention on Biological Diversity Programme. Khwaja was in United States from 1989 to 1990 as a Hubert Humphrey North– South Fellow in University of Minnesota.

Khwaja is a committed environmentalist with special interest in the conservation of biological diversity. He is fond of trekking, reading and photography.