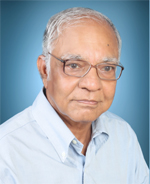 Jay Satia is a Senior Advisor to the President, Public Health Foundation of India (PHFI), New Delhi, and Professor Emeritus at the Indian Institute of Public Health (IIPH), Gujarat. He was a Professor at the Indian Institute of Management, Ahmedabad (IIM-A) for more than 20 years and served as its Dean during 1987–89. At IIM-A, he worked on operations management as well as on management of health, population and nutrition programmes. During the period 1993–2008, Professor Satia was the Executive Director of the International Council on Management of Population Programmes (ICOMP), a Malaysia-based international non-governmental organisation (NGO) dedicated to seeking excellence in management of population programmes. He has several publications to his credit, including his co-edited book titled Innovations in Maternal Health: Case Studies from India published by SAGE Publications in 2014.