I seek to develop general explanations for the spatial organization and dynamics of economic activities in capitalist societies, and to determine how a geographical perspective illuminates such explanations. Economists recently have rediscovered economic geography as a place to apply economic theory, but my research shows that a proper incorporation of the spatial dimension of society challenges much of what economic theory tells us. A geographical approach can capture the complex evolution of economic landscapes and the various non-economic processes affecting economic change. Geography has basic theoretical contributions to make to knowledge, not just empirical elaborations. I am interested in how geographers think about the world, and the changing philosophical and methodological disputes in geography. Good scholarship in geography must be grounded in an understanding of these issues, requiring familiarity with contemporary debates in philosophy and methodology outside geography. I examine the geography of development at scales ranging from the global to the local. Development possibilities don't just depend on local (site) conditions; the interdependencies between places are just as important. The ability of local actors and institutions to effectuate change must be evaluated in this context, to avoid erroneously blaming local conditions and actions for local underdevelopment. I am concerned with human welfare and inequality; with how socio-spatial positionality shapes the conditions of possibility of livelihood practices. Underlying much of my research is a concern for the persistent and too often expanding social and geographic inequalities in society, for the processes creating these, and for what can be done to create more equitable societies and a greater respect for the non-human world. I have spent considerable effort promoting radical geography, where this theme is of central importance. I have always been interested in the economic interdependencies between places (trade, investment, technology diffusion, information and migration flows). While a graduate student, I took up radical political economy as an approach to economic geography, co-authoring The Capitalist Space Economy with my first doctoral student, Trevor Barnes. I remain fascinated by the geographical dynamics of economic change at different scales, and how these are shaped by the rapidly globalizing capitalist world economy we live in. Currently, I am examining the role of trade, and free trade discourses in shaping global change, since Britain adopted free trade in 1846. I have also long been interested in the evolution of geography as a discipline, its contested modes of inquiry, and its position as an academic discipline. For example, I co-authored a National Research Council study titled Rediscovering Geography, and co-edited a book of essays on scale across the discipline: Scale and Geographic Inquiry. I have closely explored and tracked the evolution of economic geography, and its contentious relationship with mainstream and heterodox Economics, co-editing A Companion to Economic Geography, Reading Economic Geography, and Politics and Practice in Economic Geography. I study the two-way relationship between the development of geographic information technologies and social change. I have put much effort into promoting scholarship that transcends pre-existing divides between the geographic information systems and critical geography communities, catalyzing a new generation of scholars finding innovative ways to put these approaches into conversation with one another. Finally, I have long been interested in the evolution of urban life, particularly the intersections between economic processes and urban politics. Cities must be understood not only as distinctive kinds of places, but as places that are penetrated by co-evolving with nature, larger scale processes and one another. Current research examines the emergence, in and beyond cities, of contestations that call into question the generality and influence of neoliberalism, recently co-editing Contesting Neoliberalism: Urban Frontiers.
Urban Studies Inside/Out
Politics and Practice in Economic Geography 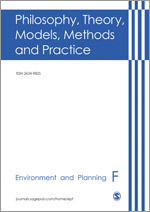