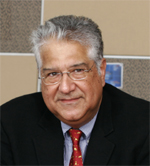 Arjun Malhotra Co-founder, SPIC-MACAY, the Society for Promotion of Indian Classical Music and Culture amongst Youth, Board of Governors, ISB Hyderabad, IIM Udaipur, IIM Shillong, and the Doon School

Orbiculsris oculi is the muscle that makes you smile—and this is a muscle that gets overworked after a session with Arjun.

In his very accomplished career, Arjun has played a role of entrepreneur, philanthropist, board member, technician, counselor, referee, salesperson, and organizer, but never a role of a disciplinarian.

Arjun has amazing capacity for networking and mindboggling capacity for remembering names, dates, and incidences. He communicates with thousands of connections, globally, on a daily basis through emails/phone, Facebook, and Linked-in. If not on a flight you can be assured of a response to your SMS, phone message, or email within few hours.

“To receive the full value of success you must have someone to share it with”—Arjun believes and has practiced this during his long string of entrepreneurial successes.

Arjun co-founded the HCL group in 1975, taking it from six-person “garage operation” to one of India’s largest Information Technology corporations. Arjun took over HCL’s US operation in 1989 and in 1992 he ran the HCL-HP joint venture in India.

Arjun later founded TechSpan in 1998 with funding from Goldman Sachs and Walden International. In 2003, TechSpan merged with Headstrong and Arjun served as CEO and Chairman of Headstrong’s Board of Directors before its acquisition for $550m by Genpact in May 2011.

Arjun did his schooling from Doon School (Dehradun) and graduated from IIT with B.Tech. (Hons.) in Electronics & Electrical Communication Engineering and received the Dr B.C. Roy Gold Medal. In 1985, he attended the Advanced Management Program at Harvard Business School. He founded the Prof. G.S. Sanyal School of Telecommunications at IIT Kharagpur through a personal endowment. Arjun was declared Life Fellow of IIT Kharagpur in February 2003 and was awarded Doctor of Science (Honoris Causa) in September 2012.

Arjun is one of the founding members of SPIC-MACAY, the Society for Promotion of Indian Classical Music and Culture amongst Youth, and is presently on their Advisory Board. He is also on the Board of Governors of a number of Educational institutions like ISB Hyderabad, IIM Udaipur, IIM Shillong, and the Doon School.

Why You Must Know This Man