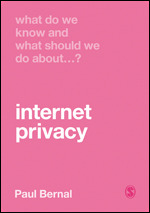 Share
Series:
What Do We Know and What Should We Do About:
Other Titles in:
Communication and Media Studies (General) | Culture, Sport and Leisure | Sociology of Culture
February 2020 | 88 pages | SAGE Publications Ltd
Download flyer
Privacy on the internet is challenged in a wide variety of ways - from large social media companies, whose entire business models are based on privacy invasion, through the developing technologies of facial recognition, to the desire of governments to monitor our every activity online. But the impact these issues have on our daily lives is often underplayed or misunderstood.

In this book, Paul Bernal analyses how the internet became what it is today, exploring how the current manifestation of the internet works for people, for companies and even for governments, with reference to the new privacy battlefields of location and health data, the internet of things and the increasingly contentious issue of personal data and political manipulation. The author then proposes what we should do about the problems surrounding internet privacy, such as significant changes in government policy, a reversal of the current ‘war’ on encryption, being brave enough to take on the internet giants, and challenging the idea that ‘real names’ would improve the discourse on social networks.

ABOUT THE SERIES: The ‘What Do We Know and What Should We Do About...?' series offers readers short, up-to-date overviews of key issues often misrepresented, simplified or misunderstood in modern society and the media. Each book is written by a leading social scientist with an established reputation in the relevant subject area. The Series Editor is Professor Chris Grey, Royal Holloway, University of London

Chapter 1: Introduction
Chapter 2: Background
Chapter 3: What do we know?
Chapter 4: What should we do?
Chapter 5: Conclusion

What Do We Know and What Should We Do About Housing?

What Do We Know and What Should We Do About the Future of Work?

What Do We Know and What Should We Do About Inequality?

Society in the Digital Age

The SAGE Handbook of Social Media

The Crisis of Presence in Contemporary Culture