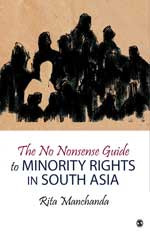 Share
Other Titles in:
Sociology of Race & Ethnicity | South Asia Studies | South Asian Politics
September 2009 | 328 pages | SAGE India
Download flyer
The No Nonsense Guide to Minority Rights in South Asia is a practical primer on issues related to minority rights in South Asian countries. It delves into all major concepts and cutting edge theories that constitute the evolving minority rights discourse. The ‘minority’ in South Asia is typically characterized by ‘non-domination’ and powerlessness, two major markers apart from language, culture, religion and ethnicity. This book explores the process of this kind of ‘minoritization’ in the region, evaluating the weaknesses of constitutional and legal frameworks that contribute to it. In doing so, it examines in detail the State’s role in the socio-political recognition, protection and exclusion of minorities.

By taking a rights-based approach, the book argues that nation-building in South Asia has been devoid of the commitment to expand the democracy and equality agenda and has instead been dominated by majoritarian and authoritarian policies. While elaborating on such politics of recognition and inequality, the author goes on to explore and analyze the ethnic composition of each South Asian country—India, Pakistan, Nepal, Bangladesh, Sri Lanka and Bhutan. She also highlights the role of minority agencies in resisting injustice and exclusion, thus providing a comparative and holistic understanding of the minority discourse in the region.

This book is an important reference resource for students and academics working in the areas of politics and international relations, especially on human rights, minority rights and state-building. It will also be a useful guide for activists.
Foreword Tapan Kumar Bose
Politics of Recognition
State Ideology and Design
Living Modes of Exclusion
Indigenous Peoples
Select References
Index