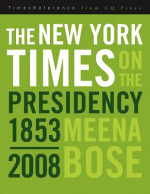 Share
Other Titles in:
Journalism | Presidency
October 2008 | 577 pages | CQ Press
Download flyer
An exciting and affordable new volume offering a unique perspective on the Oval Office The first title in a new imprint that pairs expert political analysis with rich historical news coverage, The New York Times on the Presidency is a fascinating new reference book that uses nearly 150 years of  New York Times&BAD:rsquo; reporting to explore the dynamic nature of the presidency in the American political system.  Presidential scholar Meena Bose has selectively chosen a variety of news articles, editorials, and data from The Times for which she has written context-providing narrative that discusses the key issues, leadership challenges, and turning points in each president&BAD:rsquo;s administration, from Franklin Pierce (1853-1857) through George W. Bush (2001-2008). The New York Times on the Presidency provides readers with insight into the stories of 29 presidents spanning three centuries, as well as the effect The New York Times&BAD:rsquo; position may have had on the issues of their day. Selected documents from the New York Times include:  News storiesEditorials and letters to the editorOp ed essaysPicturesPublic opinion polling dataObituaries The New York Times on the Presidency launches the new TimesReference series from CQ Press. The series is designed to support high school and college curricula and course work, focusing on topics in American government, U.S. history, elections, Congress, the presidency, the U.S. Supreme Court, journalism and public opinion. Just in time for the 2008 election, The New York Times on the Presidency will find a home in high school, public, and undergraduate libraries.