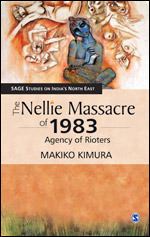 The Nellie incident, involving the massacre of about 2,000 Muslim villagers, took place during the antiforeigner movement in Assam, in order to drive out illegal Bangladeshi and Nepali immigrants. Unlike the communal “riots” in the other parts of India from the 1980s to 2000s, this was an incident which took place in rural areas. The attackers were part of the indigenous tribal population, and Assamese Hindus of lower strata.

The Nellie Massacre of 1983
is an attempt to search for clues from the narratives of attackers and survivors of the incident, which are fragmented and sometimes contradictory to each other. The key focus of the book is on the local decision-making processes of the riot agents in deciding to use collective violence against another group/community/ethnicity especially in the context of rural India.

By using the case study of the Nellie massacre, the author attempts to argue that rioters have their own agency and decision-making power, and were not mere puppets of ideology and structural causes. Instead, they interpreted the circumstances in their own way and decided to riot.

Introduction
How to Interpret "Riots": Theories on Collective Violence and the Question of Agency in Contemporary South Asia
Locating the Antiforeigners Movement in the Context of Assamese Nationalism
Election Boycott and the Nellie Incident
Agency of the Rioters: A Study of Decision Making in the Nellie Massacre
Memories of the Massacre
Conclusion
Bibliography
Index

[The book] is an important addition to the increasing number of studies on important issues of Northeast.... The book sketches a convincing picture...[it] understands the psychology what went into the carnage which shook the conscience of entire nation 30 years ago....