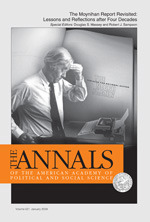 More than four decades after the publication of the controversial Moynihan Report, social scientists and policy analysts re-examine what the editors call "the most famous piece of social scientific analysis never published."

As assistant secretary in the United States Department of Labor, Daniel Patrick Moynihan wrote his report "The Negro Family: The Case for National Action" in 1965 as an internal document within the administration of President Lyndon B. Johnson. It described alarming trends in black employment, poverty, and education and argued that they were exacerbated by black family instability. While Moynihan called for a jobs program to employ black men and stabilize families, the report was attacked as an attempt to blame blacks rather than the injustices in American society and widely vilified as sexist and racist in liberal circles.

Now more than 40 years later, this issue of The ANNALS reviews this controversial yet "prophetic report" through a new lens, bringing together some of the country's foremost social scientists to consider how its arguments and predictions have fared in subsequent years and how the controversy surrounding it influenced social science in the late 20th century.

The volume also examines current issues, such as the state of the labor market for young black men in the face of continued discrimination, the link between nonmarital childbearing and poverty, the impacts of the radical transformation in the welfare system, the emergence of mass incarceration society and the persistence of racial residential segregation.

As race remains a fundamental cleavage in American society, intellectuals must embrace the systematic study of the sorts of difficult, sensitive, and often explosive issues first addressed in the Moynihan Report. This volume of The ANNALS is a must-read for students, scholars and policymakers who are ready for a more open, honest and civil debate on America's very real social problems today.