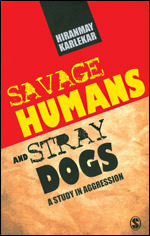 Share
Other Titles in:
Aggression & Violence
September 2008 | 296 pages | SAGE Publications Pvt. Ltd
Download flyer
The mass slaughter of stray dogs at Bangalore and elsewhere in Karnataka in 2007 outraged animal lovers throughout India. While the killing of two children, attributed to such animals, was profoundly tragic, the authorities` response was both cruel and counter-productive in terms of a strategy for controlling stray dog populations.

Savage Humans and Stray Dogs: A Study in Aggression explores the entire gory train of events in detail and argues that there might have been more to it than met the eye. The book looks at human aggression and the entire range of relations between human and non-human living beings, and contends that the onslaught had its cultural/psychological roots in a mindset that has evolved in a universe of morality that humans have created and which excludes animals. This universe reflects the defining influence of the Judaeo-Christian and Renaissance-Humanist tradition on the evolution of modernity in the West. In contrast, the major ancient Indian texts embody a very different tradition in which all creation, animate and inanimate, is seen to be a manifestation of the Universal Consciousness and, hence, deserving of justice and respect.

The author explores the psychological roots of violence, showing that in some cases, demand for slaughter of animals reflects the transference of the genocidal impulse to it.

This book is a stimulating read for people interested in the study of behavioural psychology, aggression, violence, human-animal relations and the environment. It would also be an invaluable resource for animal rights activists.

Savage Human and Stray Dogs is important as the first piece of documented research into the most blatant violation of India’s animal protection laws in recent history, committed ironically by lawmakers themselves….The book ends with a call to include animals in our moral universe which I wholeheartedly endorse.

What puts this book in a class by itself is Karlekar’s discussion of the Vedas, Upanishads, Bhagavad-Gita and Brahma Sutra and other Vedantic / Hindu texts to find out what they have to say about the human / animal divide…. It is hoped that this powerful and important book will be a wake-up call to the people of India, Asia and beyond and that the issues it raises will be widely discussed.

Hiranmay Karlekar’s book is not merely human aggression against stray dogs…It also exposes the ugly side of man, who indulges in senseless killing, intrigue, greed, jealousy—attributes not found in animals….His book is strongly recommended for those who wish to call themselves human beings in the true sense of the word.

Writing about human aggression towards animals, veteran journalist Karlekar uses as his starting point the mass slaughter of stray dogs in Karnataka last year, sparked together by two cases of the mauling to death of small children in Bangalore….Karlekar’s study goes beyond anecdotes to discuss the roles of different players in the conflict, and to describe the most humane and practical method of managing the stray dog population: ABC or animal birth control.

Is MORAL concern something owed by humans only to humans? For 2,500 years this has seemed to be the case, not by logic or argument but simply because it was taken for granted….Savage Humans and Stray Dogs which investigates the 2007 mass slaughter of dogs in Bangalore represents India’s first documented research into a specific instance of animal cruelty….Anyone who is involved in street dog management should read Karlekar’s book. Savage Humans and Stray Dogs is an invaluable record, reminder and warning against wanton human aggression towards other animals.

The book rouses the conscious of the entire society and propagates care for stray dogs.

Savage Humans and Stray Dogs: A Study in Aggression…starts off with the mass killing of stray dogs in Bangalore and elsewhere in Karnataka in 2007….Karlekar shows how much of the mass slaughter went against the directives of the World Health Organization….He examines the grounds for assuming the superiority of human beings over animals. Citing instances from ancient and modern literature, he shows how the divide between the two species is one “that isn’t”. He also analyzes the psychological dimensions of the human tendency to find cruelty “funny” or to damn the Other by demonizing it. Karlekar comes to the conclusion that the line between Nazis exterminating Jews and men murdering dogs is thin. This is an intense and sincere work, evidently inspired by Karlekar’s deep love for dogs and the resultant indignation at their slaughter.

Savage Humans and Stray Dogs …looks at human aggression and the entire range of relations between human and other creatures….The book is a stimulating read for people interested in the study of behavioural psychology, aggression, violence, human-animal relations and the environment. It would also be an invaluable resource for animal-rights activists.

The Times of India

Karlekar’s book is a great one for references, ferreting out instances of what happened in Bangalore and why they happened in the first place. But Savage Humans and Stray Dogs is also a grim reminder of how hopelessly our country continues to disrespect its four-legged citizens. Didn’t Gandhi say that the greatness of a nation and its moral progress can be judged by the way its animals are treated? Read this book and you’ll see for yourself how weak our nation is today.

It is time to remember that when we destroy and demonise the guardians, we lay ourselves open to attack. Karlekar’s book is one such spark of sanity. Try and identify the shadow.