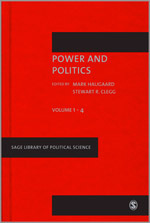 Share
Series:
SAGE Library of Political Science
Other Titles in:
Business & Management (General) | Political Theory & Thought (General)
March 2012 | 1 688 pages | SAGE Publications Ltd
Download flyer
Power theory, as a burgeoning field of study, has had, and continues to have, a huge impact across the social sciences. In particular, there has been considerable innovative work in the fields of organization studies and politics which in turn has fed research in a wide array of related fields, such as public administration, cultural studies, management and democratic theory. However, work on power is sprawling and seemingly eclectic – Power and Politics, along with the companion set Power and Organizations, takes stock of the theory by reviewing its foundations, current status and emerging new directions in both organization studies and political theory.

While there is evident synergy and cross-fertilization across the fields of organization studies and political theory, through the impact of work by figures such as Lukes, Bourdieu, Foucault, Haugaard, Clegg, Dean, Allen, and others there is sufficient distinction to warrant two separate but related collections. With Mark Haugaard, a leading figure in the field, as principal editor, Power and Politics focuses on power theory in the context of political power.

This is an interesting collection of articles that provides a good overview of the field.