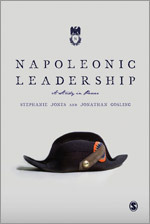 ‘Whether you are studying leadership, or doing leadership, this is a rollicking good read, and a fabulously rich book.’ - Ken Parry, Professor of Leadership Studies and co-Director of the Deakin Leadership Centre, Australia

He came to France an immigrant and left an exile – but, in a career spanning just 35 years, he became general, consul and emperor.

How did Napoleon’s name come to be synonymous with brilliance, legend and glory despite displaying opportunistic and manipulative tendencies, and repeatedly deserting those that followed him?
200 years after his defeat, what lessons can we learn from his successes and his failures?

As the world marks the 200th anniversary of the Battle of Waterloo, this fascinating study on leadership and power tackles the questions that continue to intrigue and mystify.  As now, power was gained and held by political manipulation, patronage, fear, putsch, charisma, popular vote and the new idea of meritocracy.

Through the inclusion of Reflections and Questions, Jones and Gosling also highlight some important lessons for current and future managers and leaders.

The authors have fully capitalised on their opportunity to study one of the world's most complex and enduring leadership subjects. They provide a clever and compelling integration of well-chosen thematic historical material with sharp contemporary leadership analysis that business executives, public sector leaders and academics alike can derive a great deal of intellectual stimulation and sound practical advice from. I strongly commend this novel and delightful book.

A great man once said that “class is ageless”.  Thanks to Jones and Gosling, the leadership study that is Napoleon is ageless.  Any student of leadership will come to understand the role of power, of politics, of personal charisma and of the needs of the people.

For better or for worse, power is a central issue in the study and practice of leadership. Jones and Gosling take us on an intellectually stimulating journey through the eyes of a complex leader – Napoleon – who left us a contradictory legacy of glory and misery. Business and political leaders could benefit greatly from the insights found in this book.

Gama Perruci
Dean of the McDonough Center for Leadership and Business, Marietta College, and Consultant for The New York Times in Leadership Program.

Napoleonic Leadership stands out from the other titles because it examines Napoleon’s style of leadership in a way perhaps not considered in other histories about the emperor. Indeed, it is not strictly a history at all, rather an academic text aimed at aiding the study of leadership as a subject in itself. [...] although written as an academic text, the book is easy to read and not overly heavy in the academic language that can so often put off the general reader. This interesting and different book certainly deserves a five out of five star rating.

Too limited and theoretical.

Napoleon's use and abuse of powers

Could Napeoleon have won Battle of Waterloo with a different leadership style?

Populism Versus the New Globalization

The SAGE Handbook of Propaganda