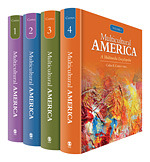 Share
Other Titles in:
American History | Ethnic Studies (General) | Sociology of Race & Ethnicity
October 2013 | 2 528 pages | SAGE Publications, Inc
Download flyer
This comprehensive title is among the first to extensively use newly released 2010 U.S. Census data to examine multiculturalism today and tomorrow in America. This distinction is important considering the following NPR report by Eyder Peralta: “Based on the first national numbers released by the Census Bureau, the AP reports that minorities account for 90 percent of the total U.S. growth since 2000, due to immigration and higher birth rates for Latinos.” According to John Logan, a Brown University sociologist who has analyzed most of the census figures, “The futures of most metropolitan areas in the country are contingent on how attractive they are to Hispanic and Asian populations.” Both non-Hispanic whites and blacks are getting older as a group. “These groups are tending to fade out,” he added. Another demographer, William H. Frey with the Brookings Institution, told The Washington Post that this has been a pivotal decade. “We’re pivoting from a white-black-dominated American population to one that is multiracial and multicultural.”

Multicultural America: A Multimedia Encyclopedia explores this pivotal moment and its ramifications with more than 900 signed entries not just providing a compilation of specific ethnic groups and their histories but also covering the full spectrum of issues flowing from the increasingly multicultural canvas that is America today. Pedagogical elements include an introduction, a thematic reader’s guide, a chronology of multicultural milestones, a glossary, a resource guide to key books, journals, and Internet sites, and an appendix of 2010 U.S. Census Data. Finally, the electronic version will be the only reference work on this topic to augment written entries with multimedia for today’s students, with 100 videos (with transcripts) from Getty Images and Video Vault, the Agence France Press, and Sky News, as reviewed by the media librarian of the Rutgers University Libraries, working in concert with the title’s editors.

"...The main selling point of this encyclopedia is its use and embedding of relevant audiovisual materials supporting the written articles....This encyclopedia, and especially the visual material, is a useful, self-guidable tool for school and academic libraries supporting courses in multicultural topics, current and historical, in the United States...."