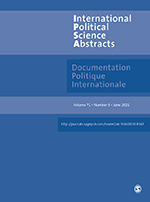 Since 1951, the International Political Science Abstracts has provided non-evaluative abstracts of articles in the field of political science published in journals (and yearbooks) all over the world. The scope of the discipline is that of the major political science journals. The divisions under which articles are listed according to the alphabetical order of first authors are those of the detailed classification scheme of the "Political Science" section of the International Bibliography of the Social Sciences, prepared by the British Library of Political and Economic Sciences (London School of Economics and Political Science).

In each issue, articles are classified in the following chapters:

If you would like your journal to be considered for coverage by International Political Science Abstracts please contact the editor at ipsa-aisp@sciences-po.fr