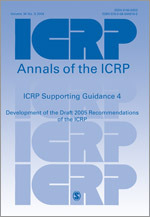 Share
Series:
Annals of the ICRP
Other Titles in:
Radiology
March 2006 | 56 pages | SAGE Publications Ltd
Download flyer
In 1997, the International Commission on Radiological Protection (ICRP) initiated a project intended to lead up to the replacement of its 1990 Recommendations (Publication 60) with a view to producing new, consolidated Recommendations 10–15 years after those of 1990. In order to stimulate comprehensive discussion, an open and iterative consultation process was used. An initial set of conceptual proposals to be considered by the Commission, and two later progress reports describing how and why ideas evolved in interaction with the radiological protection community, were published in the Journal of Radiological Protection (JRP). These three papers are reproduced here with kind permission by the Institute of Physics Publishing. As a result of consultation on the initial conceptual proposals and subsequent debate, the Commission has now drafted a proposed text for its 2005 Recommendations.

This is intended not as a radical revision, but as a more coherent statement of current policy and a simplification in its application. The summary of that draft is also reproduced here, while the full text, which is subject to public consultation until 31 December 2004, can be downloaded from the Commission’s web site, www.icrp.org.