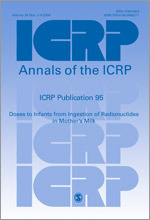 Share
Series:
Annals of the ICRP
Other Titles in:
Child Health
October 2004 | 286 pages | SAGE Publications Ltd
Download flyer
In the present report, ICRP provides information on radiation doses to the infant due to intakes of radionuclides in maternal milk. As in Publication 88 (ICRP, 2001) on doses to the embryo and fetus following intakes of radionuclides by the mother, intakes by female members of the public and female workers are addressed. Acute and chronic intakes are considered at various times before and during pregnancy as well as during the period of breastfeeding. Dose coefficients per unit intake by the mother (Sv/Bq) are given for the selected radionuclides of the same 31 elements for which age-specific biokinetic models were given in Publications 56, 67, 69, and 71. For these elements, doses were calculated for the most radiologically significant natural or artificial radionuclides that might be released into the environment due to various human activities. Dose coefficients are also given in this report for radionuclides of an additional four elements: sodium, magnesium, phosphorus, and potassium.