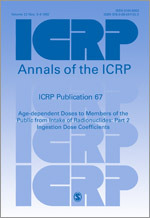 The ICRP has now given new wT values for the urinary bladder and colon, and new information has become available on the biokinetics of plutonium, americium and neptunium in humans. As a result the Task Group considered it appropriate to revise the biokinetic models for these elements given in Part 1.