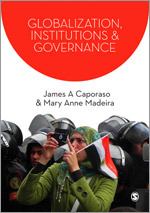 Share
Series:
SAGE Series on the Foundations of International Re
Other Titles in:
Globalization | International Relations (General)
October 2011 | 200 pages | SAGE Publications Ltd
Download flyer
The study of international relations now goes well beyond state-to-state politics and even regional politics. Technological forces are working their effects on the world as a whole, bringing state and non-state actors into contact with one another. Globalization, Institutions and Governance provides students with a sophisticated and engaging exploration of the often differing impacts of these technological forces and the wider implications of globalization for theories of global governance and the role of international institutions.

Explicitly designed to further the transatlantic dialogue fostered by publications such as the SAGE Handbook of International Relations, the series is written by renowned scholars drawn from North America, continental Europe and the UK. The books are intended as core texts on advanced courses in IR, taking students beyond the basics and into the heart of the debates within each field, encouraging an independent, critical approach and signposting further avenues of research.

Globalization is not all good, of course, but neither is it all bad. What we need -- and what Madeira and Caporaso have now provided -- is a more nuanced way of thinking about the nexus between global markets and domestic political structures. Globalization, Institutions and Governance doesn't shy away from big questions about the "co-dependence" of markets, states, and non-state actors. But the book doesn't just raise difficult questions; it also provides hard answers, abstractly as well as concretely, with reference to all sorts of up-to-the-minute examples. The Greek debt crisis, Google's recent forays into China, the war in Afghanistan: it's all here. Written with real flair and ranging widely, Globalization and International Relations is just the sort of discipline-spanning text its subject demands - and that our students have been waiting for

No longer teaching this module

Too general for the purposes of my course and not enough coverage of the diversity of international organizations.

This book is a nice additional for any reading list in International Development studies, but falls a bit short as a main textbook. This is why I will list it as recommended reading for next year (too late for this year).

The chapters give students a great overview of theories and issue relating to globalization. A very good introductory text.

A book that is long overdue. It's set to be an instant hit.