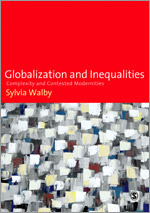 Share
Other Titles in:
Globalization | Human Geography (General) | Social Theory
July 2009 | 520 pages | SAGE Publications Ltd
Download flyer
How has globalization changed social inequality? Why do Americans die younger than Europeans, despite larger incomes? Is there an alternative to neoliberalism? Who are the champions of social democracy? Why are some countries more violent than others?

In this groundbreaking book, Sylvia Walby examines the many changing forms of social inequality and their intersectionalities at both country and global levels. She shows how the contest between different modernities and conceptions of progress shape the present and future.

The book re-thinks the nature of economy, polity, civil society and violence. It places globalization and inequalities at the centre of an innovative new understanding of modernity and progress and demonstrates the power of these theoretical reformulations in practice, drawing on global data and in-depth analysis of the US and EU.

Walby analyses the tensions between the different forces that are shaping global futures. She examines the regulation and deregulation of employment and welfare; domestic and public gender regimes; secular and religious polities; path dependent trajectories and global political waves; and global inequalities and human rights.

In this wide-ranging book, Sylvia Walby deploys her vast knowledge and wealth of research to break from inherited paradigms and to tackle the major challenges of globalization.

What an important book this is! By using the tools complexity theory offers, Walby dismantles the conservative versions of systems theory and provides a new way of approaching the dynamics of intersectional change. Her view of system environment interactions with both stabilizing and destabilizing feedback loops is itself theoretically rich. Walby then uses this model to generate significant insights into the contested nature of modernity and the diverse ways that social democratic and liberal states have constructed equality and inequality. Her theoretical model will prove to be an essential resource for researchers concerned with understanding and steering social change.

Though as critical about the feminist critiques of social theory as she is about social theory itself, in this landmark work Sylvia Walby does not stop at outlining the mistakes in both. Aside from unpacking the conflations that hinder our understanding of the social and political world, she presents an intricate, comprehensive new social theory and explains its major premises and innovations carefully and precisely. She focuses on the dynamics and complexities of social relations, integrating in these dynamics the role of complex inequalities (class, gender, race/ethnicity, sexual orientation). Then, as a grand dessert, the book not only delivers a convincing first empirical test to Walby's new theory, but also dares to take a normative position, all without resorting to hegemony... Enabling innovative understandings of age-old complexities through brand-new empirical and normative questions and answers, this book will and should affect all research in social sciences.

Having read her book, one can't help but see what was thought to be clear in new ways. Globalization and Inequalities is an impressive example of creativity realized on the one hand and a provocation to further creativity on the other... A major accomplishment.

An ambitious and complex book, in which Walby proposes solutions for some enduring problems in sociological theory; in particular, problems in theorizing large complex systems, such as whole societies.

This book is complex, stimulating and insightful and should be read by any scholar who is interested in multiple inequalities on a global scale. It can, at times, seem a little overwhelming, but this is a reflection of its complexity. The book makes an enormous contribution not only to the intersectionality debate, but also encourages the reader to question whether we are yet ‘fully modern’ and what counts as ‘progress’. As Walby argues, we are not yet modern when most states have not yet fully criminalized and delegitimized violence against women and minorities.

A tour de force that spans social theory and empirical research, seeks to persuade readers of the explanatory powers of complexity theory for the global era and places gender firmly at the centre of the analysis... Sylvia Walby’s impressive study of complex inequalities in our globalized world offers not only a new set of concepts, propositions and empirical evidence, but a vision of the future based on a commitment to equality and justice. For that, we are in her debt.

Walby’s book offers both an original theory and a discussion of indicators and findings on the basis of which the theory could become fruitful for empirical research.

Excellent integration of the structural elements of globalization with discussions of inequality.