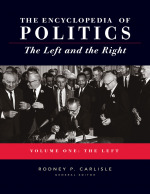 Share
Other Titles in:
Politics & International Relations
March 2005 | 1 088 pages | SAGE Publications, Inc
Download flyer
Although the distinction between the politics of the left and the right is commonly assumed in the media and in treatments of political science and history, the terms are used so loosely that the student and the general reader are often confused: What exactly are the terms left and right supposed to imply? This two-volume Encyclopedia of Politics contains over 450 articles on individuals, movements, political parties, and ideological principles, with those usually thought of as left in the left-hand volume (Volume 1) and those considered on the right, in the right-hand volume (Volume 2).

People on the Left

People on the Right

"The 450 articles have been written by an impressive array of world scholars, creating an appropriately global perspective. A brief time line of politics and helpful glossary of terms are appended, along with a reader's guide and index. . . . The work is a solid and lasting contribution to the understanding of the issues that divide us politically. Highly recommended for its readability, scholarly content, and uniqueness."

"This two-volume set would be helpful to students with a renewed interest in politics. The writing is clear and concise."