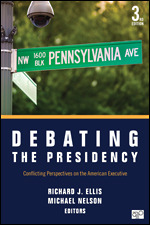 The study of the presidency—the power of the office, the evolution of the institution, the men who have served—has generated a rich body of research and scholarship. What better way to get students to grapple with this literature than through conflicting perspectives on some of the most pivotal issues facing the modern presidency? Once again Ellis and Nelson have assembled a cadre of top scholars to offer pro/con essays that will inspire spirited debate beyond the pages of the book. Based on reviewers’ suggestions the authors have added new debate topics that include the presidential power to persuade, an up/down vote by Congress on legislation proposed by the president, presidential czars, the unitary executive, and the president’s war powers. Ellis and Nelson introduce each pair of essays, providing context and preparing students to read each argument critically, so they can decide for themselves which side of the debate they find most persuasive.

“This text is a great supplement to the main text I assign. The brief introduction in each chapter nicely frames the issue and the format of the text exposes students to both sides of the debate. My students have responded very positively to the text, particularly because the essays are relatively short and written appropriately for undergraduate students.”

“This is one of my favorite books to use as a teaching tool—students respond well to the challenge to think critically about both sides of important arguments about the presidency. The chapter introductions are tremendously valuable and quite well done.”