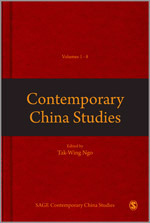 Share
Other Titles in:
Comparative Politics | Economics (General) | Politics & International Relations
September 2011 | 3 328 pages | SAGE Publications Ltd
Download flyer Recommend to Library
As the most populated nation and with the second largest economy on earth, China has undoubtedly captured the world's attention. The study of contemporary China is currently one of the most popular subjects in academia. China's rise has generated unprecedented research and interest in its politics, economy and society in the past few decades.

This series, Contemporary China Studies, will not only provide a much-needed set of quality references for universities and lecturers to build their curricula, but will also serve as a valuable tool to researchers undertaking a literature review of the field. Furthermore, this series bridges some gaps in the state of the field by bringing together seminal works written by established scholars. It contains more than 100 carefully selected articles and book chapters which focus on the politics, economy and society of China since 1949. Published in two four-volume sets each of which is self-contained, the first set deals with politics and the second with economy and society.

Each volume includes a short introduction offering a summary of the existing scholarship on the historical legacies, development trajectory, and current debates concerning a particular theme. Moreover, each four-volume set has a general introduction which synthesizes the various themes to offer an overview of the nature and development of the Chinese political order and its economy and society. The aim is to demonstrate the link between various themes and show how developments in the political, economic and social realms become mutually constitutive or contradictory in the formation of a unique order.

Volume One: Genesis of the Party-State System and its Changes and Continuity

Volume Three: Local Autonomy and the Struggle over Central Authority

Volume Four: Multiculturalism and the Quest for National Unity

Volume One: Market Reform and Legacies of the Command Economy

Volume Three: The Demise and Re-emergence of Civil Society

The SAGE Handbook of Contemporary China

Economic Reforms in India and China

The Belt and Road Initiative

Grass-Roots Democracy in India and China