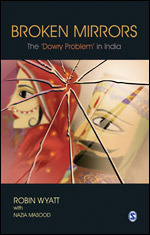 Share
Other Titles in:
Sociology of Gender | South Asia Studies | Women's Studies (General)
January 2011 | 272 pages | SAGE India
Download flyer
In fairytales, good triumphs over evil and mirrors don't lie. Reality, however, presents a different picture as fairytale marriages fall apart and end in a ghastly nightmare: battered brides, unnatural deaths and the ubiquitous 'dowry'. Why does the spectre of 'dowry death' continue to haunt Indian society even a decade into the 21st century? Robin Wyatt, with Nazia Masood, investigates this very problem in Broken Mirrors, urging readers to look beyond the obvious. The narrative, as it effortlessly turns its gaze from the story of a survivor of domestic violence to that of one accused of the crime, smashes the conventional image of so-called 'dowry deaths'. It picks up each of the shattered pieces of the mirror and looks into them closely, and what emerges is a complex portrait of a society where marriage counselling remains taboo and inaccessible to large sections of the population, where the quest for 'justice', armed with powerful, 'pro-women' anti-dowry laws, brushes aside the truth behind the breakdown of many a perfect marriage.
Foreword Flavia Agnes
Introduction
Shattered Dreams
Shalini
Of Dogs and Chains
Akhil
Together Yet Alone
Mohini and Naresh
Burned to Death, But Why?
Neeti
The Tyranny of Perceived Optionlessness
Gagan
When Inadequacy Kills
Jasmeet and Tarampal
Conclusions
Index

This book seeks to open up certain widely prevalent yet poorly understood features of the construction of dowry related cases brought before the criminal justice system in India through analyses of personal narratives of women and men who are directly implicated in a selection of such cases or have knowledge of them… The book is a significant contribution to the literature on dowry related litigation and the dowry discourse in India.