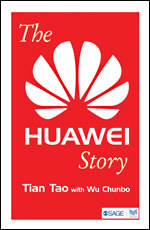 as a private company owned by its employees. Its core missions are building telecommunications networks, providing operational and consulting services and equipment to enterprises inside and outside of China, and manufacturing communications devices for the consumer market.

The book by Tian Tao and Wu Chunbo is an extraordinary research effort, to analyze and describe a very complex reality and a very special entrepreneur. Huawei is a prominent company among the most successful and most internationalized in China. This book offers insights to Western readers, allowing them to truly understand Huawei, its management philosophy and culture, and the special leadership approaches of Ren Zhengfei.

It is a very valuable work to understand entrepreneurship in our complex world.

“This book offers insights to Western readers, allowing them to truly understand Huawei, its management philosophy and culture, and the special leadership approaches of Ren Zhengfei.”

This is the most complete book about Huawei I have ever read.

This book will give readers a special insight into Huawei’s capacity and entrepreneurial drive under the dedicated leadership of Mr Ren Zhengfei.

“Over the course of the last quarter century, Huawei has become one of the most important telecommunications companies in the world and, arguably, one of the most powerful Chinese companies in the global economy. Yet, there is much that is not known about Huawei and much that is misunderstood. As the foremost authority on Huawei in the world, Tian Tao brings deep knowledge and unprecedented access to help pull back the veil on one of the world’s most enigmatic companies. This book will be essential reading for politicians, pundits, and anyone interested in gaining a deeper understanding of this important company.”

Doug Guthrie
Professor and Former Dean at the George Washington School of Business
Author of Dragon in a Three-Piece Suit: The Emergence of Capitalism in China

“Over the past two decades, Huawei has composed an amazing epic in the business world. It has started from an emerging market and conquered the global market. What is the code of success? This book offers the most reliable answers.”

“This book does not present the business history of Huawei only; it also highlights the evolution of the business philosophy of Ren Zhengfei, the boss of the company. Huawei is Mount Everest in the mind’s eye of all Chinese businessmen, and Ren Zhengfei has behaved like a hermit living in a cave. He has not created any precept or claimed any truth. As the closest observers of Ren Zhengfei, Tian Tao and Wu Chunbo are the most likely authors to tell us the precepts and truths of Ren Zhengfei.”

“Huawei is a privately owned company. It is highly sensitive to technological changes. It is the real multinational based in China. These facts reflect the alertness, adaptability, and conviction of Ren Zhengfei, the top leader of Huawei. Ren is a unique manager and his speeches have been widely quoted because they offer great philosophical delights. This book is full of such delights, which you cannot miss.”

“One of the attributes of Huawei is that the company has gone global reaching a relevant position in Europe and addressing the United States. The US government, however, is slowing down the process of Huawei entering the American market on suggestions that Huawei could get access to critical US government information. No question Huawei is the result of the entrepreneurial effort of Ren Zhengfei. The book allows us to get some understanding of the entrepreneur, his philosophy, the culture he wants to establish in Huawei, and the process to do it.

Few of the leading Chinese companies have taken relevant positions internationally. For a high technology company, addressing the international markets is an important challenge. But Huawei has managed to have thousands of employees outside China and satisfy important customers in many countries. The book helps in understanding the approaches followed by Huawei. Mr Ren Zhengfei has been capable of pioneering the development of technology while growing in the world. Obviously, this has required a strict control of information which attaches a flavor of secrecy and even mystery to the behavior of Mr Ren Zhengfei. He has maintained the company as private and his management style has been extremely unconventional.

The book by Tian Tao and Wu Chunbo is an extraordinary research effort, to analyze and describe a very complex reality and a very special entrepreneur. It is a very valuable work to understand entrepreneurship in our complex world.”

“After years of phenomenal growth, China has arrived at a point where it is a middle-income economy. Its big challenge is to reform the driving forces of the economy so as to be able to continue the upward journey, rather than becoming stuck in the so-called “middle-income trap.” A key to success is developing innovative products and solutions, and building global brand recognition and independent marketing structures. Japan and later Korea succeeded in doing this. Can China do the same?

We still don’t have the answer. However, the story of Huawei indicates that it can be done. Huawei happened in a time and a place that were unique in the Chinese history. Founder Ren Zhengfei left his job as an army engineer when the Chinese military-industrial complex was radically downsized. He started a small import business in the commercially most liberal place in China, the special economic zone of Shenzhen, just across from the Hong Kong border. He made the most of the opportunity that history provided. He chose an operating model that had never been seen in China, sharing ownership with his employees. Huawei’s growth is the result of dedication and pragmatism of Ren and the other early employees.

Reading Tian Tao’s account of what has driven Huawei to where it is today provides more insight than anything I have seen before about Huawei. His isn’t the traditional type of corporate history that we know well, the ones that start with the family background of the founder, then focus on early challenges, maybe describing some near-death experiences, before moving on to ultimate success. Rather than delving into sales statistics, product development, and so on, Tian Tao focuses on the evolving philosophies and strategies that have guided the company. It is a fascinating inside account that explores the soul of the company.

It is a story told in a Chinese way—there are many metaphors—and from a Chinese perspective, which here and there will surely surprise a Western reader. But this has the great advantage of helping us understand how China sees the world. The many stories about the Chinese corporate landscape are an additional bonus.

A dominant theme is how quickly the wheel turns in business. Firms grow, may become immensely successful but most often then flounder and disappear. The telecom sector has had more than its share of such development. The list of failed ICT giants is long. Huawei itself was close to leaving the ICT sector—in the book I learned that Huawei in 2002 agreed to sell its hardware system to Motorola for 10 billion dollars, investing the proceeds in real estate. A new Motorola chairman turned down the deal at the very last minute. Imagine how it, had it gone through, would have changed the course of both companies!

Awareness of the continuous cycle of growth and death has very much influenced Ren Zhengfei. A constant question in his mind has been how Huawei could succeed when so many others failed. Humility and curiosity have been guiding sentiments. Or to use a rather Chinese term, “self criticism.” Ren Zhengfei wrote in 2008: “Without self-criticism, we would have confined ourselves to an enclosure and missed out on the new ideas which have proven essential for us to become a world-class corporation … Our future is dependent on how long we keep the tradition of self-criticism.”

One of the answers to the many challenges that have confronted the company has been a willingness to learn from the positive experience of others not just in the area of technology but also in soft matters. Huawei has made a major and multi-year effort to learn and adopt Western management techniques. It also understands that as a global company it needs to integrate into the societies where it is active. A quote from Tian Tao tries to capture this: “Huawei leverages the best from China and the West, and yet it is neither Chinese nor Western.”

My personal acquaintance with Huawei is as one of 15–20 foreign senior advisors. We meet Ren Zhengfei and the corporate leadership every year for a polite but frank dialogue of a kind that I doubt takes place anywhere else in the Chinese industry. This willingness to listen to and debate with foreigners with widely varying backgrounds speaks tons of the openness that characterizes the company.”