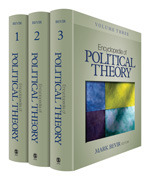 Share
Other Titles in:
Political Theory & Thought (General)
May 2010 | 1 584 pages | SAGE Publications, Inc
Download flyer
In discussing a topic, political science lecturers and course textbooks often toss out the name of a theorist or make a sideways reference to a particular theory and move on, as if assuming their student audience possesses the necessary background to appreciate and integrate the reference. However, academic librarians can tell you this is usually far from the case. Students often approach them seeking a source to provide a quick overview of a particular theory or theorist with just the basics: the who, what, where, how, and why. And librarians often find it difficult to guide these students to a quick, one-stop source.

SAGE Reference presents the three-volume Encyclopedia of Political Theory, available in both print and electronic formats.

This work serves as a reference source for anyone interested in the roots of contemporary political theory. Drawing together a team of international scholars, it examines the global landscape of all the key theories and the theorists behind them, presenting them in the context needed to understand their strengths and weaknesses. In addition to interpretations of long-established theories, it also offers essays on cutting-edge research as one might find in a handbook. And, like an unabridged dictionary, it provides concise, to-the-point definitions of key concepts, ideas, schools, and figures.

".... Coverage of the field is broad and deep, with 475 signed entries written by more than 350 academics from institutions worldwide.... Entries range from less than a page in length (Essentialism, Subaltern) to eight-plus pages (Confucianism, Libertarianism) and include cross-references to related essays as well as suggestions for further reading.... The Encyclopedia of Political Theory is recommended for academic libraries and large public libraries."

"Bevir ... has done a super job editing this new encyclopedia, which thoroughly addresses the key themes found in contemporary political theory and its historical antecedents.... This set evidences a sense of balance and proportionality among its articles that can be hard to achieve.... Summing Up: Highly recommended. *** Lower-level undergraduates and above, general readers."-CHOICE

"In this three-volume set, Bevir (Univ. of California, Berkeley) has assembled a useful tool for anyone researching political philosophy.... Bottom line While the general public might find it useful for research a political ideology or theory, college students majoring in political science will probably find it most useful. Libraries that own the Encyclopedia of Political Thought... might consider a newer book. Purchase if your budget permits."