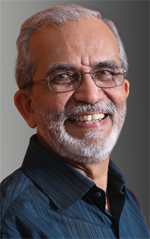 Suhas Palshikar, based in Pune, India, taught political science from 1978 first at SP College, Pune, and later at Savitribai Phule Pune University, Pune (1989–2016). He is co-director of Lokniti, a research programme on comparative democracy, based at CSDS, Delhi, and chief editor of the biannual journal brought out by SAGE, Studies in Indian Politics. He was also the editor of Samaaj Prabodhan Patrika during 1990–2004.

He is associated with the National Election Study since the 1996 elections. He has also been involved in various research projects of Lokniti, focusing on study of public opinion in India. He was one of the principal investigators of the international project on Democracy in South Asia (Round One and Round Two).

Professor Palshikar writes in English and Marathi on contemporary politics and has also written extensively in academic publications on the theme of democratic politics in India. He has been a frequent contributor to The Indian Express and journals such as Seminar and EPW. His Marathi books include Maharashtratil Sattasangharsh (2007), Rajakarnacha Taleband (2013) and Desh Pradesh (2014). His recent publications include Indian Democracy (2017) and co-edited volumes in Electoral Politics in India: Resurgence of Bharatiya Janata Party (2017) and Party Competition in Indian States (2014). His forthcoming work includes a report on Politics and Society between Elections (with Siddharth Swaminathan, 2020).

Besides participating in many international seminars, he has been a visiting fellow at the University of Chicago and Brown University.
The Last Fortress of Congress Dominance
Indian Democracy