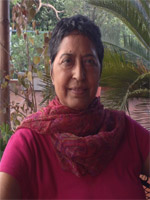 Shubh Kumar-Range is currently leading the gender and food security integration in agricultural policy for United States Agency for International Development/Volunteers in Overseas Cooperative Assistance (USAID/VOCA’s) support to the Government of Ethiopia’s Agricultural Growth Program. She has been actively involved in the Community of Evaluators for South Asia and its strategic development since 2008. She has conducted a large number of strategic, policy, and programme evaluations focused largely on poverty, nutrition, and food security. Earlier, between 1978 and 1995, she conducted path-breaking research with the International Food Policy Research Institute, establishing the significance of women’s income and their role in decision-making for improving household welfare parameters, including food security and child nutrition. She has written and published extensively on these issues, and many of her writings have been used as reference material in leading universities around the world, including the Kennedy School of Government at Harvard University.