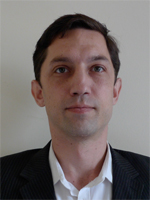 Sam Tranum has worked in journalism for about a decade, writing for publications in the United States (the Charleston Daily Mail 2000–02, the South Florida Sun-Sentinel 2002–04, and Nuclear Intelligence Weekly 2009–11), editing for a paper in India (The Statesman 2011–12), and teaching journalism in Kyrgyzstan (2007–09) and India (2011). He holds an MA in international relations (2007) from the University of Chicago and a BA in social and global studies from Antioch College (2000) in Yellow Springs, Ohio, in the United States. Tranum served in the US Peace Corps in Turkmenistan (2004–06), and wrote a memoir about his experience, Daily Life in Turkmenbashy’s Golden Age (2010). He taught journalism at the American University of Central Asia in Bishkek, Kyrgyzstan, and published the anthology Life at the Edge of the Empire: Oral Histories of Soviet Kyrgyzstan (2009). He wrote about the energy business from Washington DC and Kolkata, and published a novella set in the uranium industry, U Is for Murder (2011).
Powerless