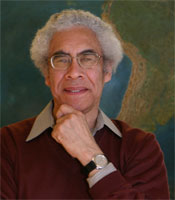 S. George Philander, Knox Taylor Professor of Geosciences at Princeton University and Research Director of ACCESS (African Centre for Climate and Earth System Science) in Cape Town, South Africa, has a Bachelor of Science degree from the University of Cape Town and a Ph.D. (Applied Mathematics) from Harvard University. He is a member of the National Academy of Sciences and a fellow of the American Academy of Arts and Sciences, the American Geophysical Union, and the American Meteorological Society. Dr. Philander’s research interests include the oceanic circulation, interactions between the ocean and atmosphere that result in phenomena such as El Niño and La Niña, paleoclimates (including the recurrent Ice Ages of the past three million years), and future global climate changes. His two books for laypersons, Is the Temperature Rising? The Uncertain Science of Global Warming and Our Affair With El Niño: How We Transformed an Enchanting Peruvian Current Into a Global Climate Hazard, reflect his keen interest in improving communications between scientists and laymen. The goal of the African climate center, which Dr. Philander is currently directing, is to give Africa its own voice on environmental issues such as global warming.
Encyclopedia of Global Warming and Climate Change, Second Edition