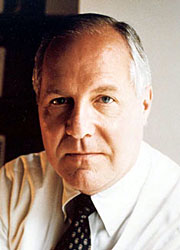 Received his Bachelor of Arts in history from the University of Southern California. Upon graduation, he moved across town to UCLA Medical School where he received his MD, as well as his psychiatric residency training. Following an interest in academic psychiatry, Dr. Schulz became a clinical associate at the National Institute of Mental Health where he worked in the Neuropsychopharmacology Section at the Clinical Center. During his clinical associateship, he became interested in clinical trials for patients with schizophrenia, as well as research in family issues. In 1980, Dr. Schulz moved to the Medical College of Virginia where he started the Schizophrenia Program. His research interests focused on neuropsychiatric studies of teenagers suffering from schizophrenia, including CT research. In 1983, he became Medical Director of the Schizophrenia Module at University of Pittsburgh where his research focused on treatment refractory schizophrenia. In 1986, he moved to the NIMH extramural program where he contributed to the National Plan on Schizophrenia Research. Along with Dr. Carol Tamminga, he started the biennial International Congress on Schizophrenia Research. Dr. Schulz was Professor and Chairman of the Department of Psychiatry at Case Western Reserve University School of Medicine and University Hospitals of Cleveland from 1989-1999. His research interests were MRI imaging in adolescents with schizophrenia and bipolar illness. He also has been active in clinical trails with antipsychotic medications.
Psychotic Disorders in Children and Adolescents