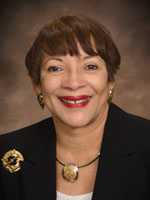 Ruth S. Johnson is a professor emeritus at California State University, Los Angeles. She has served in a variety of educational settings in New Jersey and California. Ruth received her Ed.D. in 1985 from Rutgers, The State University of New Jersey. Her dissertation was titled An Exploratory Study of Academic Labeling, Student Achievement and Student Ethnographic Characteristics. At the K–12 level, she served as a classroom teacher, an instructional consultant, a director of elementary education, an analyst, an assistant superintendent of schools in the areas of curriculum and business, and as a superintendent of schools. She initiated efforts that resulted in raising academic standards and student achievement in low performing school districts. She served as an education consultant for the New Jersey Department of Education and as a director for two non-profit organizations in California which focused on raising student achievement in underserved student populations. Her major scholarly interests and publications focus on processes related to changing the academic culture of urban schools, with an emphasis on access and equity. In addition to her four published books, she has written numerous book chapters, articles, editorials, research reports, and manuscript reviews. As a recognized speaker, she has presented nationally to scholarly and professional audiences and serves as a consultant to schools and districts.
Developing Portfolios in Education
Using Data to Close the Achievement Gap