Rosemary-Claire is an Assistant Professor in Geography, Planning & Environment at Concordia University, in Montreal, Canada. A political ecologist and economic geographer by training, she primarily draws on feminist political economy, animal studies and feminist science studies, combined with primary fieldwork and multispecies methodologies, to understand the relationship between capitalism and biological – especially animal – life. She has ongoing research projects on the politics and production of capitalist natures (with Jessica Dempsey), the changing orientation of sea otters within capitalist development in Alaska, and the global exotic pet trade. Her work has been published in the Annals of the Association of American Geographers, Environment and Planning A and D, Capitalism Nature Socialism, and The Handbook of Political Ecology, among others journals and books, and she is co-editor (with Kathryn Gillespie) of Critical Animal Geographies: Politics, Intersections and Hierarchies in a Multispecies World (2015, Routledge). She received her PhD in 2014 from the University of British Columbia. 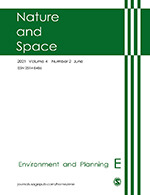