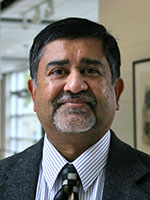 Ramesh N. Rao is Professor and Chair of the Degree-In-3 Program, a brand new, state-of-the-art online program, at Columbus State University. He started his teaching career at Truman State University in Kirksville, Missouri, in 1991. He was promoted to Associate Professor in 1997 and to Professor in 2004. He was hired as Chair, Department of Communication Studies and Theatre, Longwood University, Farmville, Virginia, in 2005, where he served as Chair of the department for six years. As a prolific author and a well-published commentator, he is the author of two books on Indian society and politics which include: Coalition Conundrum—The BJP’s Trials, Tribulations and Triumphs (2001) and Secular “Gods” Blame Hindu “Demons”—The Sangh Parivar through the Mirror of Distortion (2001). Besides, his scholarly articles have been published in journals such as Media Development, International Journal of Group Tensions, Communication Research, Journal of Vaishnava Studies, International Journal of Sociology of the Family, The Subcontinental, and China Media Research. He has authored chapters in more than half-dozen scholarly collections, and he has published more than 50 opinion essays in newspapers and magazines such as The Washington Post, India Abroad, The Guardian (London), The Pioneer (New Delhi), The St. Louis Post-Dispatch, etc. In more than a quarter century of teaching in the United States, he has taught courses ranging from Public Speaking to Mass Media Law, and from Persuasion to Intercultural Communication.
Intercultural Communication