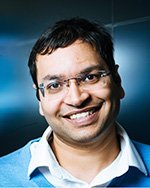 Rakesh Kumar Renowned technologist and Professor at the University of Illinois, USA

Rakesh Kumar is a Professor of computer engineering at the University of Illinois. His research in computer system design has pioneered technologies which are used widely today. Several of his papers have been recognized as the most influential papers in computer systems; many of them have won best paper awards. His research has received coverage and mentions in outlets such as BBC, Fortune and The New York Times. In addition to being an award-winning researcher and teacher, Rakesh thinks deeply about issues at the intersection of technology, policy and society, especially in the Indian context. His opinion articles have appeared in The Telegraph, The Statesman, The Tribune, Nature India, Business Today and the Washington Examiner. Rakesh received a BS from IIT Kharagpur in 2001 and a PhD from the University of California at San Diego in 2006. He is often seen eating adventurously at a restaurant or spending time with his very active eight-year-old.
Reluctant Technophiles