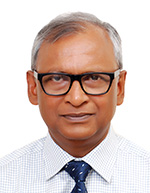 Prashun Dutta, a veteran with over three and a half decades of work experience initially as a management consultant with the National Productivity Council and Tata Consultancy Services (TCS) and later as a senior executive at Reliance group of companies, has a heady mix of management consulting and industrial engagement under his belt. A postgraduate in industrial engineering and a Fellow (equivalent to PhD) of the IIM Calcutta, he has worked in the areas of strategy, structure, and systems for an array of businesses and governmental organizations. As a senior executive with Reliance Industries, Prashun started with managing the business analysis function for the Polyester Fibre Group and went on to assume the role of chief information officer (CIO) at Reliance Infrastructure. Subsequently, he became the CIO at Tata Power from where he superannuated in 2015. Now attached to Gaia Smart Cities, a startup company in the smart cities, and Internet of Things (IoT) space as Advisor, Prashun is applying his systems thinking approach anew.

The diverse experience is posited on a polymath personality, with wide-ranging interests from history through quantum physics to tennis and music. Acquaintance with such apparently disparate areas allows Prashun the appreciation of subtle commonalities and interlinkages that exist between them. The consequent “big picture” that emerges, feeds the passion for systems thinking and Prashun has an abundance of it. This book is a direct outcome of this intrinsic fountain.

Like most articulate/eloquent individuals, he delivers talks on a variety of topics and has written extensively in several magazines and journals. A recipient of several awards both for his work and as a thought leader, he now lives in Mumbai with his wife and two sons.

He has started penning his thoughts in a blog, Managing In The Big Picture (thebigpicture492.wordpress.com)