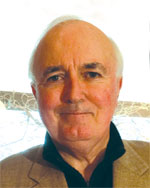 Michael Fenwick Macnamara retired as a senior official from the Australian Civil Service in 2005. His career provided him perspectives into the working principles and practices of an administrative system inherited from the British, as in India. This allowed an insightful understanding and interpretation of the system practised by the administrators of British India.

He has a personal connection and deep interest in the history of India. He is a member of the Kipling Society, the Indian Military Historical Society and is a life member of the British Association for Cemeteries in South Asia.

He is currently an independent scholar and Honorary Associate, School of Humanities, University of New England, Australia.