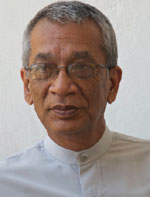 Mahendra Man Singh is a first time author and a commentator on the social and political conditions in Nepal. His professional life has mostly been in the private sector and currently he is Founding and Managing Director of TMB-Energietechnik (responsible for Alternate Energy Projects). He has been actively involved in the politics of Nepal and is a known face in the corridors of power—both in the now deposed monarchy and in the Nepali Congress.

He has been actively involved in social programmes such as the Organization for Participation in Development (ORDEV) Nepal, of which he was the Founder-President. The author has taken keen interest in formulating and implementing rural development projects with a special focus on ‘skills training’, ‘adult education’, ‘water supply’ and ‘small credits’. This particular programme was conducted under the ‘Basic Needs Program’ of King Birendra.