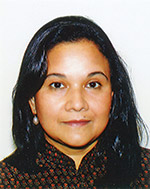 Madhuri Bose was born and brought up in Kolkata, the daughter and second child of Amiya Nath and Jyostna Bose, grand-daughter of Sarat Chandra Bose and grand-niece of his younger brother Subhas Chandra Bose. Reminiscences from her father Amiya of the immense contributions of the iconic Bose brothers to the Indian freedom struggle, were the stuff of her childhood and the genesis of this book.

After graduate and post-graduate studies in the University of Calcutta and Jadavpur University, Madhuri undertook post-graduate research at the Graduate Institute of International Studies in Geneva, Switzerland. She has pursued her professional career as a human rights advocate for over more than three decades with the International Labour Organisation, Geneva; the United Nations Development Programme, East Africa; and the Commonwealth Secretariat in London. In her professional capacity, Madhuri has written extensively on human rights issues, and has travelled widely in Africa, Asia and Europe.

The Bose Brothers and Indian Independence