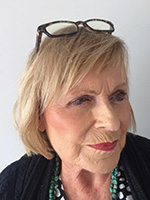 Linda Conway Correll George Upon graduation from college, Linda set out for New York City, where she hoped her dream of writing music for Broadway shows would become a reality. Instead, her first musical success was the jingle she wrote to introduce Beech-Nut Fruit Stripe Gum on her day job at Young & Rubicam Advertising. Ten years and several tier 1 New York agencies later, she swapped the excitement of the Big Apple for her weekend home, a farm in rural Massachusetts, where she expanded her writing experience, creating innovative radio commercials (one, a Clio Award winner) for a local FM station. But Linda missed her former professional life. She relocated to Houston, Texas, as a copywriter at a national agency, followed by promotion to Associate Creative Director. After 7 years in the Lone Star state, she returned to her native Rhode Island as a VP/Creative Director. She transitioned into academe, teaching advertising courses at Northeastern University in Boston and developing the forerunners of Creative Aerobics at the Rhode Island School of Design. Professorships followed in southeast Missouri; at the flagship University of Florida; in southern Illinois; and summers in Ahmedabad, at MICA. During this period, Linda and her students won local, regional, national, and international advertising awards. Linda retired from teaching but continues to accept freelance writing assignments, international awards for them, and commissions for her serious and sacred music compositions. But, alas, no Broadway shows. Currently, she lives outside of Nashville, Tennessee with her 17-year-old Turkish Van kitty Sweetie, and her husband.