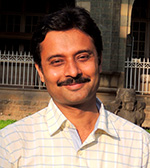 Kausik Bandyopadhyay teaches History at West Bengal State University, Barasat, Kolkata. Prior to this, he taught at Kidderpore College, Kolkata, and at the Department of History, North Bengal University. He was a Fellow of the International Olympic Museum, Lausanne (2010). A former Fellow of the Maulana Abul Kalam Azad Institute of Asian Studies, Kolkata (2006–2009), he is the Academic Editor of Soccer and Society (London: Routledge). His areas of research interest include Social and Cultural History of Modern India, Popular Culture in South Asia, History of Sport and Contemporary South Asia.

Dr Bandyopadhyay is the author of Bangladesh Playing: Sport, Culture, Nation (2012); Scoring Off the Field: Football Culture in Bengal, 1911–80 (2011); Playing for Freedom: A Historic Sports Victory (2008); and Playing Off the Field: Explorations in the History of Sport (2007); co-author of Goalless: The Story of a Unique Footballing Nation (2006); editor of Why Minorities Play or Don’t Play Soccer: A Global Exploration (2010) and Modernities in Asian Perspective (2010); issue editor of Asia Annual 2008: Understanding Popular Culture (2010); and co- editor of Fringe Nations in World Soccer (2008) and Sikkim’s Tryst with Nathu La: What Awaits India’s East and Northeast? (2009). He has also published a large number of articles in national and international journals.