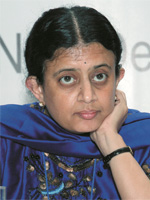 Kala Seetharam Sridhar is Professor and Head, Centre for Research in Urban Affairs, Institute for Social and Economic Change (ISEC), Bangalore. She has written several books on urban issues, and contributed to several journals and articles in various books. She is the recipientof several national awards such as the VKRV Rao award for her contributions to social sciences, and international awards by the Global Development Network (GDN) for her research. She was India countryexpert for ADB’s project on green urbanization in Asia, and is involved in ADB’s project on urbanization in India and China. She was senior advisor to GDN’s global project on urbanization, and member of the government of Karnataka’s expert committees on urban development.?
The Paradox of India’s North–South Divide