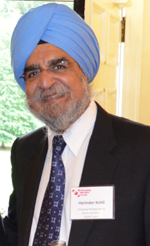 Harinder S. Kohli is the Founding Director and Chief Executive of the Emerging Markets Forum as well as Founding Director, President, and CEO of Centennial Group International, both based in Washington, DC. He is the Editor of Global Journal of Emerging Markets Economies. Prior to starting his current ventures, he served over 25 years in various senior managerial positions at the World Bank. He has written extensively on the emergence of Asia, Latin America, Africa, and other emerging market economies, financial development, private capital flows, and infrastructure. He is an author and co-editor of India 2039: An Affluent Society in One Generation (2010), (2010), A Resilient Asia amidst Global Financial Crisis (2010), Islamic Finance (2011), Asia 2050: Realizing the Asian Century (2011), and A New Vision for Mexico 2042: Achieving Prosperity for All (2012). He led Centennial Group teams that helped ADB and CAF develop their long term corporate strategies. Mr. Kohli is currently leading a year-long EMF study on the long term prospects and challenges faced by emerging market economies worldwide.